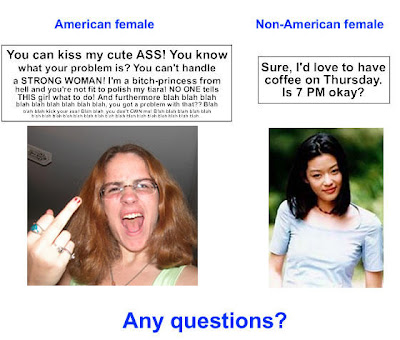 Men and women are two sides of the same coin. Without each other, there can be no fulfillment and no peace of mind. Together, there is life. This is the way it has been since the very beginning. It is an active thing, not a passive one. It's not enough for the people to just show up in each others lives. Each of you needs to actively love the other.

Many American men are willing to do this. Almost all American women are not. To make matters worse, these women do not value the men who are willing to love them. Instead, they value the men who couldn’t give a shit about anything. He gets laid constantly and gives nothing to anyone (even himself). Since this type of man is good for nothing and is often a criminal, the last thing he is interested in or is capable of is taking care of a woman or a family. Women are also like this themselves, but pretend they are not. That pretending often extends towards making a phoney marriage and having several children she has no intention of putting any effort into raising. Most of the time, the point of the marriage is to manipulate the system into fleecing a good man of all his possessions.....rinse, repeat, until she gets too old.

This is not normal. For whatever reason, it is a problem endemic to westernized countries but is worst in the US, where our laws seriously enable these behaviours.

What many American men are figuring out though is they don't have to put up with this. By understanding the problem and its various aspects and, most importantly, the actual depth of the problem, he can avoid most of it, even fight back. The biggest obstacle though, is he is incomplete without a legitimate love in his life. American women use this fact as their greatest source of sinister manipulation. They will dangle the image of this in front of you constantly but never, ever give it to you. The reason is simple: they can't. Because they can't, they are completely unacceptable as anything but a casual sexual fling. But one that is constantly trying to do you harm, requiring extreme vigilance and protective measures. Hopping from one loser to the next, in the vain hope that the next one might not be like this is a depressing way to live. Rather than find a rare jewel, most men simply give up after a while and retire from "the game".

Most men don't know that this is abnormal. They think all women are like this and have always been this way. That's a dirty lie. A lie that women in this country foster in an attempt to keep men from looking around. It turns out, that things were never like this for our grandfathers and great grandfathers. It's a recent problem. More importantly, it's a localized one.

In large chunks of the world, women aren't like this. They are the way they are supposed to be. If you bond with one and then love them, they will love you back. Although this is only the bare minimum needed for a good marriage and a good life, it changes things dramatically.

This means that it is a good idea to date a number of women from these places. Because you will find a jewel there eventually. No matter what, you will find a large pool of women who are sincere in their attempts to be with you. Some of these women will be sexually promiscuous. Some of them will be nuns. Most will be somewhere in between. Luckily, sincerely loving women will be common, no matter what she is like elsewise.......because it's a seperate issue. If you want a nun or a tart, a schoolteacher, a welfare mom or a doctor, you will find someone sincere. Since you will also find the occassional evil person mixed in, you must learn to tell the difference. But the odds are stacked in your favour.

That just doesn't exist in the US anymore (but it was once the rule, not the exception).
.