An example: I had this “friend” of mine from college. Occasionally I’d visit her and we’d hang out or something. Several times female friends of hers would be around and I’d ask about them. One time she told me this girl was a lesbian and that she absolutely hated men (I had sex with that one, hehehe). Another, she told me she was married (a lie). A third, she told me that the girl thought I was unattractive (I slept with that one too). The point here is my “friend” would continually try to cock-block me. The reason is simple: she wanted me for herself…..just not today (or any other time she had access to a man….I was her reserve).

I’d also like to point out that my “friend” thought it was just okay fine to let me drive 1000 miles to go see her and then not be there. I haven’t seen her since.

Women “friends” don’t care about you. What they care about is keeping a man (or several) in reserve, in case they want them later.
.
Never Allow a Woman to Call You a Friend Until You've Had Sex At Least Once
.

I’ve been friends with many women and had sex with them. If anything, my sexual desire for them has made me a better friend because the level of intimacy and their importance to me is greater. The problem is, they won’t be friends back. Totally self-absorbed and obsessed with self-destructive and manipulative behavior, women aren’t capable of being anyone’s friend.

However, that’s not what we are really talking about here. We’re talking about a woman who actually rejects you as a man but wants to use you for something. To keep you in her life, she makes you a “friend”. But what does that mean? It means you are a second class love interest. You are expected to do things for her but are unworthy of her doing things for you. There are a great many things a woman COULD do for you as a real friend (for example, actually give a shit about you, lol). However, the only thing women actually do for men, is give them sex. At least, that’s the only thing my female friends ever gave me, despite what I wanted from them. Never allow a woman to call you a friend until you’ve had sex with her at least once. And for God’s sake, don’t believe her when she says it. You may be her friend. But she isn’t yours. She may be your lover but you are nothing but disposable to her. In the beginning, you have some respect from her that rapidly diminishes. When it’s gone, so is she. But if you start out as “friends”, there will never be even a shred of respect for you. You are NEVER a friend to her. You are that guy she keeps around that isn’t good enough to be her lover.

This doesn’t mean you should commit to a woman….no, no, no. What this does mean is the relationship only lasts as long as she is still willing to work hard and compete in order to “get” you. When that behavior ends, she usually leaves (note that actually “getting” you tends to end the behavior made). Sometimes though, they want to hang on for various reasons. Don’t let them.ou are NEVER a friend to her. You are that guy she keeps around that isn’t good enough to be her lover.
.
Friends with Benefits
.

I’ve done the "friends with benefits" thing too. Basically, what happened was a woman I was in a relationship with demoted me to the status of sex object (I don’t want to be your boyfriend anymore, but I still want to have sex). The point of this situation is their respect for you has dropped to a very low point, but they still need you for something (in my case, it was for sex, but many times, it is something more utilitarian). Their behavior towards you gets more and more uncaring and disrespectful. Just say no.

This doesn’t mean you should commit to a woman….no, no, no. What this does mean is the relationship only lasts as long as she is still willing to work hard and compete in order to “get” you. When that behavior ends, she usually leaves (note that actually “getting” you tends to end the behavior made). Sometimes though, they want to hang on for various reasons. Don’t let them.
.
Ladder Theory
. 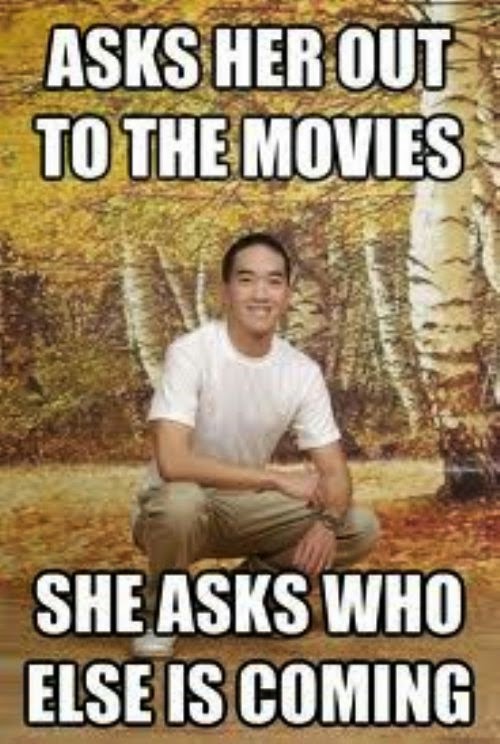 The problem with Ladder Theory is it assumes women make choices based on an objective evaluation of the value of a man that is commonly agreed upon. All you have to do is look around to see that isn’t true. If anything, we have a big problem in our culture with criminal status men gaining access to normal and high status women…..often ruining them in the process. Also, the idea that there is a friend ladder and a sex ladder isn’t true. People can and do “hop ladders” all the time, with little or no effort, simply by changing their behavior toward the person. If anything, women keep their so-called male friends as a “dick in reserve”. Is that really a separate ladder? No. She is just giving a guy that should be given high priority because of his traits (looks, personality etc.) low priority because he isn’t acting in the way that stimulates her neurotic personality correctly.

The problem with women is they are nuts. When you meet them and start to get “involved” with them, from your perspective, you are building a relationship……something real, that has permanence over time. That’s what people who are involved are supposed to be doing. But that’s not what she is doing. From her point of view, although she gives lip service to the relationship, she will only stick around for as long as you provoke strong feelings in her. The moment you slip, even if you are married with kids for 20 years, she is gone. The sicker ones don’t care if the feelings are positive or negative. Want to hop ladders? Learn to provoke strong feelings in her. She’ll jump your bones.

Ladder theory is the way things should be. Want a hot, high status, young, fertile woman? Then go to the gym until your body looks like a model’s, wear expensive fashionable clothes, and get a high-paying, high-status job where you are the boss. Sounds great. Those are all things a powerful, motivated man can and usually will do. There is a problem though. IT DOESN’T WORK. Women don’t give priority to men like that. They say they do, but their behavior doesn’t match up with this. You’ll get more play as a dirty, dishevelled member of a rock band that is going nowhere fast or as a drug dealer. Even the women that do go for the man with money are only looking to exploit him. They don’t want him, they want his money. Of course, they don’t want a strong man with money (because he’ll keep her on a tight leash). They want a WEAK, low status man with money.
.

.
-----------------------------------------------------------------------------------------------------------------------------
.
"Corresponding to true women, there are extremely female men who are to be found always in the apartments of the women, and who are interested in nothing but love and sexual matters. Such men, however, are not the Don Juans." -- Otto Weininger, Sex and Character, Male and Female Sexuality
.
"He is polite and rather anxious to please. He wishes always to do the thing which happens to be the proper thing at any given time. He never would think of initiating anything novel or starting out in a new and unexpected course. He likes very much to be with ladies, and ladies like him – in a way. He is a most useful creature and absolutely harmless, intended by Providence to carry wraps and rugs, to order carriages, to provide theater-tickets, flowers, bon-bons, opera-boxes and four-in-hands, according to his means and the position which he holds. He will call regularly upon a girl and in fact upon all the girls he knows, and he will keep it up for years, and it will never mean anything to him or to them, for he is essentially a tame cat…He is really an indispensable person in our modern life; for it is desirable that young women should have some male creature about them to fetch and carry – one who will do it all for the mere pleasure of the service, and who will never agitate them and disquiet them or make them feel it necessary to be on their guard.: -- Excerpt from a 1902 issue of Cosmopolitan Magazine.  .
Posted by . at 14:30