No Woman is "Out of Your League" 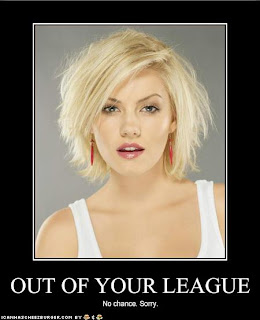 What I mean by leagues is who is the woman hanging around. There are certain groups of people who only mingle among themselves and don’t allow outsiders to join them. Many women lie, and say they are out of your league. What they mean by this is they have confused their ideal of looks with an ideal that everyone has. They aren’t attracted to you, so you must be ugly (the biggest, most common lie women tell us). 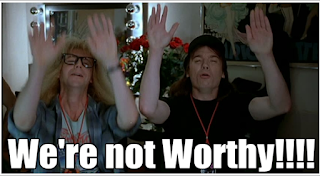 Unless she is going to parties over at Bill Gates house, or is the CEO of a company, she is most definitely in your league. You could line 100 of her up (not that difficult to do) and one of them would go, “Oh yeah, baby, you’re the guy for me”. The exact same number that you would get if you lined up 100 truck stop waitresses, etc. We all pretend there are stratifications among the 90% of everyone who is average. But, there aren’t. Not in our culture. Instead, people pair up in a semi-random way, controlled mostly by whomever happens to be hanging around. But, who says you have to limit yourself to who is hanging around? Once you know about this situation, you can go looking for it. You’ll be shocked by what you find.

The problem is that one doesn’t whistle at you as you walk down the street. You need to do things to get her to reveal herself. Meanwhile, she is home alone, wondering why great guys like you never give her the time of day. Hilarious.

Try this experiment on a regular basis. Dress up in a reasonable fashion (ie wear normal clothes that are clean and in reasonable condition…bathe and be groomed). Then go to the mall and walk around. Keep an open posture at all times, relaxed with a open look on your face and a slight smile….and just stroll around. Every time you pass a woman, look her in the eye for a second or two. Do this a hundred times and think about the results. Most women will do some form of avoiding your gaze. An obnoxious minority will make a face at you (stupid bitches). A significant number will be open and friendly toward you. And one or two will look like they want to knock you down, rip your clothes off and fuck you right there. Be sure to smile and nod at any woman who looks like that…..if you want her or not. Why, because it shows very clearly the next step. Your smile and nod are the first step of talking to her and getting her as a part of your life. Notice the dramatic difference in her behavior vs every other freaking woman you ever have contact with. Only women who are like this are really worth any significant amount of your time. Only women in the “friendly” category are worth being nice to. Everyone else can go fuck themselves. Why? Because it has nothing to do with you. Only with them.

But, most importantly, note the randomness of the whole damn thing. Ugly girls laugh in your face, moms with kids being open and friendly, nuns and teenage sex goddesses looking at you with lust…..all at random. All hidden until you went looking for it.
.
Women's Requirements in a Man
.
QUOTE: I’ve been turned down for a date because the girl only wanted to date a guy with blue eyes. Mine are brown. So I didn’t get a date. And yes, as you can tell, I’m all broken up over it. Yeah. 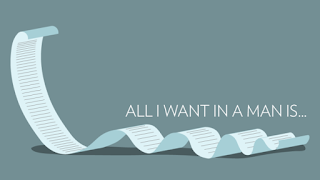 The correct response to something like this is to laugh in the woman’s face, roll your eyes in that “I can’t believe what a fucking loser you are” manner and walk away. When a woman has a weird attitude like this, she is telling you quite clearly, and in no uncertain terms, that something is wrong with her. She doesn’t know how to play the game and will likely end up failing at it. Either she will end up with nobody or she will end up with an obese, ugly, smelly, unemployed guy…..with blue eyes.

This is a lot different than a woman saying, "I want a guy I’m heavily attracted to physically." Or "I want a guy who I find interesting to talk to." Or one of lots of different criteria that fall under personal taste. Those things speak directly to the enjoyment of her being with the guy. Blue eyes don’t fit the bill with that. It shows she is clueless about how her choices affect the quality of her life. One day, she will look back at her crappy as hell life and go, “How the hell did I end up here?”
.
Seeking After Money Is Not An Effective Means of Attracting Women
. 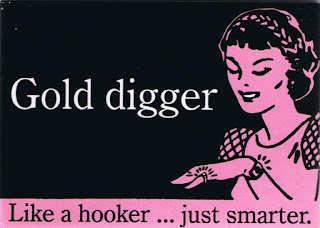 My whole point in posting this research is to show that, no, seeking after money is NOT an effective means of getting women and sex.

What’s going on here is two-fold.

First, women are women are choosing most sexual partners at random with a small percentage of women (gold diggers) choosing a man based on money (only lots of money will do) but as a means of exploitation and have having no intention of doing anything but burning the relationship to get their hands on that money.

Second, most women are lying about the randomness thing. They list a whole bunch of attributes (including income) that they want in a man. When they randomly reject you, they bring up lack in any of these attributes as the reason, and the very next day are with someone who has none of the attributes on that list. Hypocrisy. Income (height is another one) is a favourite because women list qualifications that only a tiny fraction of men meet. It’s a handy way to reject you. However, it’s total bullshit. The truth is, if she won’t her sister will or her friends will. That is the truth. Men can (and do) make themselves crazy trying to meet the qualifications of women. They work out obsessively, work 80 hour weeks, 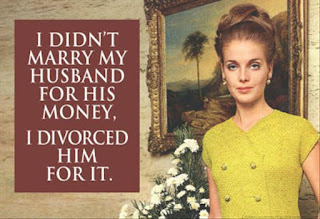 dress in insanely expensive clothes, get all manner of plastic surgery, and a lot of other goofy stuff to try and “measure up”. It just doesn’t work. It doesn’t work because the idea of objective measures of a man is just a scam. Women are lying.

If you redid this study with other objective measures…..things like lean muscle mass, height, education, dominance, whatever, you would find the exact same thing. The only exceptions would be fame (if you are on TV, you are going to get laid) and deviance (criminal history, drugs, violence etc.)

This has implications for a man’s strategies for dealing with women. Work on THEM, work on the situation, don’t waste time working on yourself.
.